A Smoke Detectors Are Life Safety Devices In Murrieta 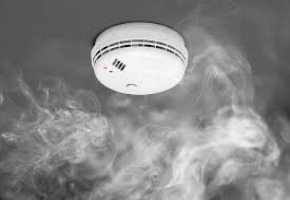 The most effective way to ensure that you always have operable batteries in your smoke detectors is to change them twice a year at the same time you reset your clocks for Daylight Saving Time.

How Do Smoke Detectors Work?

In the United States, a person dies in a fire or from a fire related injury every two hours. According to National Fire Protection Association data, most people who survived house fires were able to do so because the building was fitted with working smoke detectors. According to a related NFPA study, close to 1,000 lives could be saved each year if all home owners would use and properly maintain smoke detectors.

The Photoelectric Smoke Detector
Inside this circular device is an enclosed space where, on one end, a beam of infrared light (or light from a LED) travels unblocked toward the other end of the enclosure where a photodiode (a tiny, tubular component that turns light into electric current) is mounted. The light beam does not hit the photodiode; it is directed slightly away from it. However, when smoke is present in the area, it enters the smoke detector and gets into the space where the light beam and light detector (the photodiode) are mounted. Smoke particles scatter the previously straight light beam and cause some of it to hit the photodiode.

The Ionization Detector
Ionization refers to the process where molecules become either positively or negatively charged. Inside an ionization detector is an air-filled compartment where two electrodes — in this case, small, thin wires that conduct electricity — are installed. A constant electric current passes between these two electrodes in the absence of smoke. When smoke enters the compartment, however, its particles become ionized, disrupting the constant electrical current between the two electrodes. Read more here.

Smoke detectors are less prone to false alarms due to cooking and have features like built-in wireless networks, so that for example if a detector on the first floor goes off, all the detectors will sound the alarm, saving you precious minutes.

Kids under the age of five are at twice the risk of dying in a residential fire than those in other age groups, according to the U.S. Fire Administration. And fires are the leading cause of household deaths in the U.S. Among the thousands of children killed or injured in home fires each year, about 40 percent are under five years of age. Because kids of this age aren’t as capable of exiting a home or understanding the dangers of fire risks, parents must take extra precautions to reduce fire risk in the home and prepare comprehensive safety and evacuation plans to ensure their children escape safely.

Heat sources—including matches, lighters, and other items commonly found in homes—are the leading cause of fire-related deaths in kids under the age of five. And two-thirds of all homes in which fires result in the death of a child under five years old aren’t equipped with working smoke alarms. Check more here.

Properly installed and maintained smoke detectors can reduce the tragic consequences of home fires, but even greater gains can be made by combining these early warning systems with a reduction in home fire hazards and in practicing a well-planned fire escape route.

Installing and maintaining smoke and carbon monoxide (CO) alarms can save your life. Luckily, they’re inexpensive and easy to install. Basic smoke alarms start at $15, with CO alarms costing $35 and up. Newer models offer more features. For example, interconnected smoke alarms communicate between devices and provide integrated, whole-house protection. Whether the alarms are hardwired or wirelessly connected, with such a system when one alarm detects smoke or CO, all of them will sound.

Every Home Needs Them

Smoke alarms are a must in all homes, and CO alarms are needed for any home with fuel-burning appliances such as a furnace, water heater, range, cooktop, or grill. Even those living in all-electric homes should install CO alarms, because CO can seep into the house from an attached garage or if a backup generator is used too close to your living quarters in the event of a power outage.

You’ll need smoke alarms that detect flaming and smoldering fires for each bedroom, with at least one alarm installed on each floor, including a finished attic and the basement. You should also have a CO alarm on each living level, in the basement, and near (not inside) an attached garage. See full article here.

Smoke Detectors Can Save Your Life And Those Of Your Family

Smoke detectors are an essential part of a fire-prevention strategy, so you should replace yours as soon as possible. Smoke detectors can run off of a 9-volt battery or 120-volt house current. The best location for smoke detectors is near bedrooms, in hallways and at the top of stairwells

Related Articles:
Insulating Your Home For Energy Efficiency
Some Ways To Keep Your Home’s Electrical System Stress-Free This Summer